MY TRIP TO AFRICA WITH MPA, JANUARY 2018

I first became acquainted with Janet on a DVD which my cousin Heidi made when she went to Kenya with Sr. Toni 10 years ago. 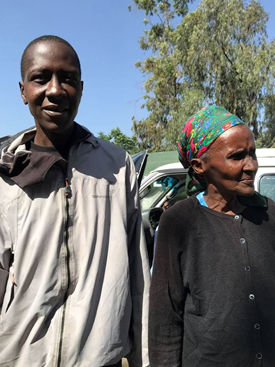 The DVD explained how Jamii Bora had been founded by Ingrid Munro in one of the largest slums in Africa, the Kibera slum in Nairobi, Kenya, “home” to over 200,000 people.  More than 30 years ago, Ingrid began the microfinancing organization Jamii Bora (which means Happy Families in Swahili) with 50 of the poorest beggars in the slum.  Janet was one of those 50 women. At the end of the film, the camera focuses on a smiling Janet who says, “Don’t feel sorry for us.  Invest in us.  Not even the sky is the limit.” That gave me goose bumps.  What I learned was the difference between a hand out and hand up.  I guess I always thought of charity as something I “should” do, with the added bonus that it made me “feel good.” Here was a new way of looking at and dealing with poverty.

When I went to Africa in January, I met Janet in person!  How exciting!  With a hand up from microfinancing, Janet had worked her way out of poverty and now serves as a social worker for Jamii Bora.  With Janet, we walked through the Kibera slum – accompanied by three security guards, one of whom was Alex, a former boy of the slums himself.  In the slum, a group of about 35 boys sat or lay in a group by the sewage canal.  Many sniffed glue from soda bottles to lessen hunger pains. Every day, fearless Janet, determined Janet, visits the boys and the women nearby, trying to convince the boys or the women (some who sell the glue) to enter Jamii Bora.  One or two ask for help.  Janet tries to convince the boys to go to school. They listen to her. If a boy expresses interest in schooling, it is arranged, but he often goes one day, then leaves.  Alex also talks to the boys.  He is believable because he has been where they were.  Janet says: “Alex changed; so can someone else.”  Alex, now 29, sells sweets from 5pm to10pm; he has been saving since 2011. “We go step by step,” Janet says.

I know that MPA goes step by step also, and in faith the journey continues.  What a joy to be part of it! What an awesome experience to actually meet with the people who have used their gifts.

This month of Thanksgiving, I am grateful for many people:

I’m grateful for Sr. Toni who followed through with her dream and founded Microfinancing Partners in Africa, showing how one person can make a difference. Since I live with Sr. Toni in community, I have experienced vicariously every step of her journey – deciding to begin MPA, organizing people, weighing her suitcases, converting her emails into Updates, participating in her galas by dressing as a cow and singing “cow songs” like “Send in the Cows” (to “Send in the Clowns.”) I never thought I would actually go to Africa myself.

I’m grateful for faculty members and students from Bishop DuBourg High School, especially the Class of 1980.  For my Golden Jubilee as a sister, they totally surprised me by making it possible for me to accompany Sr. Toni to Africa in Jan., 2018. There I saw for myself what Toni talked about – like how hard it was to get clean water, the resilience of the women, and the smiles on the faces of women who could provide for their families because of microfinancing.

I’m grateful for special people I met in Africa who believe in the potential of even the poorest of the poor to raise themselves from poverty.