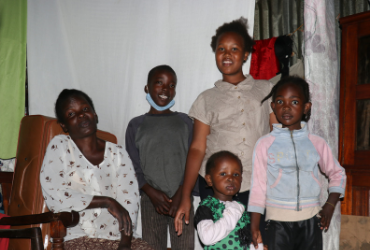 Though not trained as a teacher, Rael Otanga, 45 has chosen to keep her children busy in her small room within the Firestone slums by teaching them simple life skills. In spite of life being difficult, Rael, a widow whose husband died several years ago, tries to remain positive.

“Children here are idle and hungry most of the time so I took on the challenge of engaging them despite having little to give them. Because  I used to work in a church-run school before I lost my job two months ago, I can teach them a few things,” she says.

Rael says that since the COVID-19 was announced in Kenya and the government took steps to contain it by locking down the city of Nairobi, everything has moved from bad to worse. “The environment in our slum has completely changed since people have no jobs. We are poor and we don’t have anyone to turn to for help,” she laments.

She says she has exhausted her little savings which she had been micro-managing for the last two months when the government issued a curfew. Her small firewood business has done poorly since most people have no purchasing power. Therefore, feeding her three children has become an even more challenging task.

So when Jamii Bora Trust sent her money with which to buy some food, she was lost for words. “It was raining heavily when I received the money. It was a miracle I didn’t expect so I said ‘Amen’ and ‘thank you.’

After receiving the money, she shared some with her mother in the countryside and then bought some maize flour. She took a little of it to some other needy neighbors.

She also made some porridge for a number of children who had missed meals for many days. Rael hopes some more people could help the poor, especially those living in the slums.

As of this report, she is also grateful that no one in the slum has yet contracted the disease. “God has been good to us”.

Ephrazia Ludovick is a 47-year-old widow who has four children. She is among the former members of BUWEA... Read More
Learn More
MENU