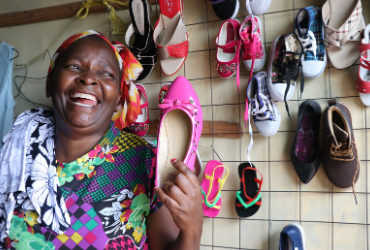 Margaret Wanjiru, moved to Kamulu, Kenya in 2014 after her husband built a permanent home for their family. When they moved to their new home, all their savings had been spent and they became “house poor”.

Prior to moving, Margaret had been selling second-hand shoes and all her savings from the business were used for the building of their new home.

Without any form of income in their new town or connections to find a new job, she didn’t know where to start. “I was new in the area without friends except for a few from the church where we began attending,” she says.

“This was a dream come true as I was able to buy a collection of blouses which I would sell. In my wildest dreams I never knew or expected to grow my business in a new city so fast until I joined Yawezeka SACCO.”

Following the repayment of her first loan, Margaret has since taken out two additional loans to purchase more clothing items to sell in her store.

“Each of these loans enabled me to achieve what I could only dream of. I work hard to repay my loans,” she boldly states.

Today, Margaret’s two daughters Njoki and Njeri attend school at a University and her nieces proudly help in the clothes store when not attending school. Her son completed his High school in 2017 and has begun college as well.

In the future, Margaret hopes to open another clothing store at Ruiru town in Kiambu County.