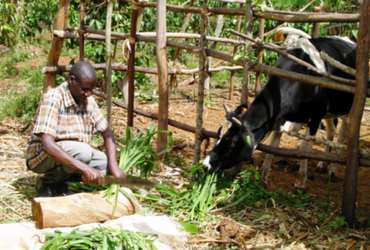 George Mukasa of Kiyumba village, Masaka District is the father of eight children. He and his wife received an in-calf heifer in 2013 through the MPA Cow Project after completing all training and preparations required. Before receiving the cow, George and his wife argued frequently due to the stress of living in such extreme poverty. At times, they struggled to remain together. With little to no food, nor sustainable income, tensions ran high.

Today, their cow produces around 18 liters of milk each day which is more than enough to drink and sell locally as an income-generating project. George and his wife are paying their children’s school fees and even making donations towards the efforts of building a better school for their children.

Additionally, George and his wife have been able to use the same training and support from the Cow Project to start and raise piglets as another income project.

With the constant manure source as a fertilizer, their vegetable crops grow at a much better quality and from the coffee beans they planted they are harvesting 300kgs while other farmers in their community who don’t have manure harvest about 200kgs.

Thanks to the Cow Project, George, and his wife have found not only hope for the future but happiness for today.