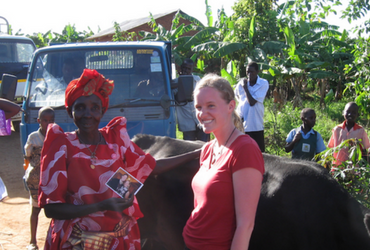 Gaudensia Nakafeero is the 69-year-old grandmother of 4 grandchildren she cares for.  She lost her husband and one of her sons who previously fully supported herself and her family.

Before they received a cow, which is now the main source of income thanks to the sales of the cow’s dairy milk, for over eight months the MADDO Cow Project trained her in sustainable agriculture and livestock management.

MADDO helped her to learn the skills for how to plant and grow vegetables and fruit. Today, she sells mangoes and oranges which have greatly increased her grandchildren’s nutrition and their family income.

Manure from the cow has rejuvenated the soils fertility and their crops have now improved in quality (i.e. a bunch of banana that weighed 5kgs only fed three, but now that of 7kgs feeds at least the entire family).

With the income from not only the dairy milk but also the produce, Gaudensia can afford to pay all school fees and the requirements to provide better medication and medical care for her family. Their house looks beautiful after she has furnished it and replaced the wooden doors and windows with metallic ones with the income generated from the cow project.