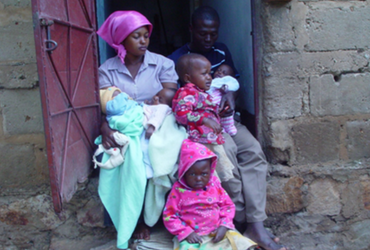 Fidea is a 24-year-old whose husband works as a motorcycle rider.  They started their family with twin girls. Two years later, along came triplets.  It isn’t easy to take care of five girls under the age of four!

Prior to Fidea’s involvement with BUWEA, her children struggled to have enough food or milk each day and she was not able to work because of the lack of childcare help or options available.

With the help of a small loan through BUWEA, Fidea has been able to start an income generating project by making and selling clothes. However, as she began to have a successful income-generating business, the stress of having five children needing her attention constantly impacted her work greatly!

Today, the triplets attend a daycare thanks to the supporting community of BUWEA who runs the daycare as a group income project so that its members are able to focus on their individual projects. Fidea still manages to watch the twins while she is busy sewing new and old clothes. Now that the triplets are at daycare, she can also sell tomatoes and other food since she’s able to use her time more efficiently.

It would not be without the community of BUWEA that Fidea and her children are healthy, growing strong, attending school and looking forward to the future.