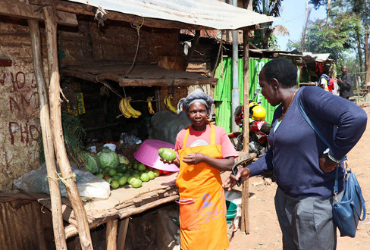 Doris Nyakara arrived in Nairobi in 2009 from Nyamira, in Nyanza. She had come to visit her husband. She was young and eager to see what life in a new city would be like! Her idea of the city was bliss and tranquility, but little did she know she was in for a different experience. “I knew nothing about life in the slums. I thought all the bright lights and busy streets meant everybody had money.

“My husband met me at the bus station when I arrived and took me to Kibera slums. The houses were made of mud which I least expected. The masses of people were overwhelming and there was little space to walk or drive in the narrow corridors. However, I had to start making a living to help the child I had.

“I sought a friend who then lent me Ksh. 1500 ($14 USD). With this amount, I started a charcoal business. Everyone in my family relied on my small business and income. After my second child was born, my husband lost his job and we had to relocate to Deep Sea Slum.

“When I got here in 2011, our homes were burned down by a fire. We were out in the cold for several days. In 2014, another fire burnt our homes again and while wondering what to do next, I heard about Yawezekana SACCO and I joined. Later in 2015, another fire burned our houses for the third time. I managed to borrow some money against my savings.

“With the loan I was able to reconstruct my house and build a simple grocery kiosk. I will always be grateful to Yawezekana SACCO because they have made it possible for me to feed my family”.