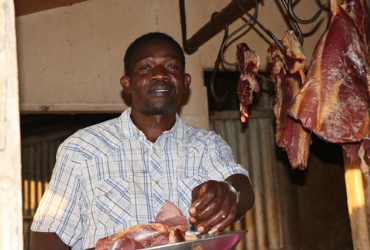 Caroline Anyango Anyang lost her husband 11 years ago. Having had her first child at the age of 15 and left with four children to take care of, life wasn’t easy. She struggled by either weeding farms for neighbors or by selling fish at Obaria Beach in Homa Bay County. The little money she made was used to buy food to feed her young family.

“Life was really hard because sometimes drought would ruin all the crops or there were less fish in Lake Victoria to catch,” she says.

Before long somebody convinced her to join a Norwegian-based organization that provided banking opportunities for women. From this initiative, she managed to receive small loans but it wasn’t enough to feed, clothe or educate her children. Each group formed had 30 members and whenever they took loans they were forced to pay back on a monthly basis so that the organization could make more profits from their high interests.

“Being a widow, it was hard for me to manage to pay the loans due to unavailable sources of income,” she laments.

But in March 2017, she heard about Yawezekana SACCO and became a member.

“Immediately I started saving Ksh 200 ($1.90 USD) that I was making from a retail shop that I had managed to open.”

Recently she was able to receive a loan of Ksh 10,000 ($96 USD) which she used to stock up her small shop. “The good thing about Yawezekana SACCO is that we are given ample time to repay our loans and the interest is small enough compared to the other groups that we had joined earlier on.”  The loans are repayable in one year at 14% interest.

Fast forward to today, Caroline took another loan of 20,000 Ksh ($194 USD) in February last year (2018) which she used to replenish the stock in her shop. She used the balance to have her children complete high school. She just completely repaid her loan early this year and she is currently asking for a loan of Ksh 40,000 ($387 USD).

She is hopeful about the future and feels once her children complete college, she will have a bigger shop. 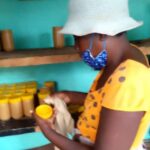